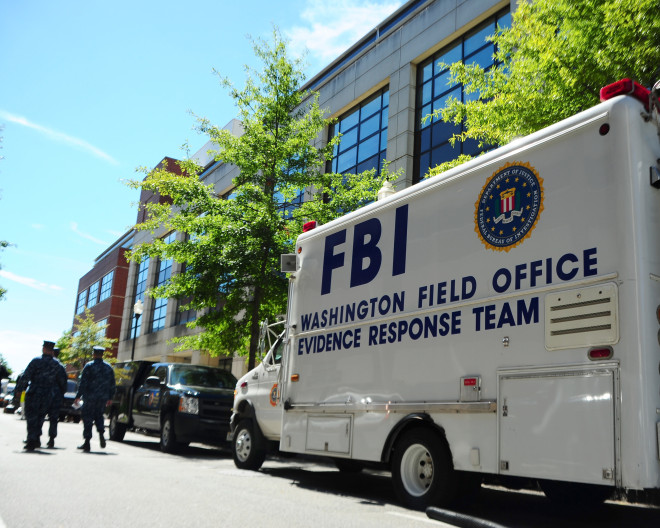 FBI collects evidence at Building 197 on board the Washington Navy Yard. US Navy Photo

“They assumed there was a second shooter until they could prove otherwise and they blew open every door if it didn’t have a window, if it had a window they broke the window. They cleared every single room,” Hilarides said. “The building is in pretty bad shape.”

The search of the five story “rabbit warren,” was complex and thorough, he said.

Last month the Navy issued a $6.5 million contract to CH2M Hill Constructors, Inc. to give the Navy options on how to renovate building after the shooting where 13 people — including Alexis — died.

“There’s a whole bunch of my work force that isn’t interested in going back in and have it look the way that it looked [before the shooting],” Hilarides said.
“You have to change it at least. If you [look at] Sandy Hook, they’re razing the entire [elementary] school.”

Hilarides said NAVSEA staff could expect to work for up to a year in the former U.S. Coast Guard Headquarters at Buzzard Point in Southeast Washington, D.C.

The redesign of Building 197 — originally built at the turn of the 20th Century — will also bring a new name.

Names under consideration include the Joshua Humphreys building — one of the original builders of the Navy’s first six frigates — or Capt. James Lawrence — the U.S. Navy captain who’s dying order was “Don’t Give Up the Ship,” Hilarides said.

As reported by USNI News earlier this month, the Navy has decided not to demolish the building.

“We need to be back in that building. I think Secretary of the Navy [Ray Mabus] said it very well: “Our ships get hurt all the time and we put them back together’,” Hilarides said.