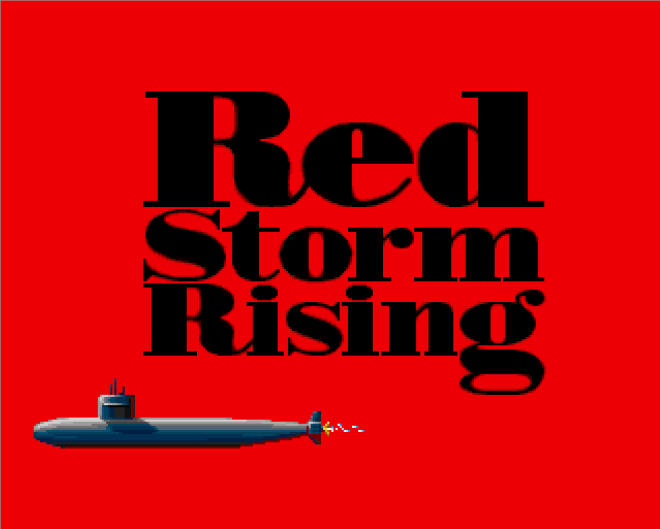 Image from the 1988 game Red Storm Rising by MicroProse based on the novel by Tom Clancy and Larry Bond.

Longtime friend of Tom Clancy and co-author of Red Storm Rising—the 1985 bestseller about a full-blown war between the Soviet Union and NATO—Larry Bond spoke with USNI News last week shortly after Clancy’s death. Bond — a retired U.S. naval officer — is also the creator of the well-known naval strategy game “Harpoon,” which Clancy played while crafting the world of The Hunt for Red October. Bond, now a novelist himself, spoke with USNI News about how Clancy did his research, the origin of “Harpoon,” why Clancy’s novels helped define the Cold War for a generation of Americans, and the relationship between torpedoes and orcs from “Dungeon and Dragons.”

USNI News: Part of the lore regarding the origin of The Hunt for The Red October is that Clancy came up with the idea by playing “Harpoon” with you. Is that how you remember it?

That’s not true at all. I think the genesis for the novel generated his interest in “Harpoon.” When I wrote, “Harpoon” I was still in the Navy—the first draft when I was still in uniform and we were using it for tactical training on my ship.

The trick was these guys are naval officers. They’re not gamers. I had to keep the game butt-simple. Also, we had another game we worked with called NAVTAC.

The Navy got into [NAVTAC] in 1976. It was on the cover of Surface Warfare magazine and it just so happened I was in port in San Diego and the guy who wrote NAVTAC was on the tender two piers over. I walked over and we chatted and he gave me a copy and I signed for the damn thing and brought it back and the skipper was delighted and gave me a Bravo Zulu. The problem was it was [classified]. It had classified information in it because all of the data came from out of Navy intel publications. That meant you couldn’t leave it lying around for people to read it. I couldn’t make multiple copies; I couldn’t pass it out to anybody. The data sheets were all classified. It limited the game’s exposure. 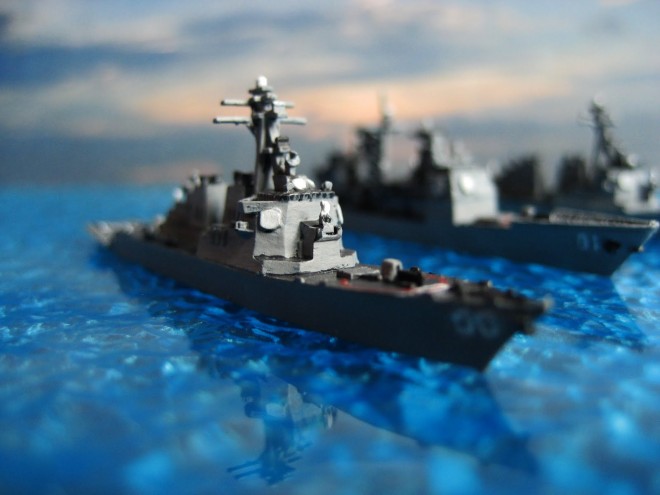 A miniature of an Arleigh Burke destroyer (DDG-51) used for the Harpoon board game.

What I did was write an unclassified, simple game that didn’t require you to know a lot about naval warfare. It explained a lot of things: What is a convergence zone? What is ESM? What is all this stuff?

That made it commercially viable. After we played a little bit on the ship, I approached a friend of mine—Dave Arneson—who was president of Adventure Games Inc. in Minnesota. He was co-creator of Dungeons & Dragons. I was playing [D&D] before it was published.

I went over to Dave’s place and he said, “We’re going to fight these orcs.” I was [thinking] “What’s an orc?”

USNI News: How did Tom Clancy find you?

Clancy, through no artifice of mine, found out about “Harpoon.” Maybe he was cruising for sources, maybe someone mentioned it to him and he bought a copy. He sent letter to me with some questions about “Harpoon” and naval warfare.

I answered his letter—which is why I always answer my mail—and we ended up becoming good friends.

He would call me and we would shoot the breeze for hours over the phone. I finally went out and visited him at his place. At that point, Hunt was still in manuscript. He asked me some questions about naval terminology, like: “Is it ‘hard right rudder ‘or ‘rudder right hard’?” Stuff like that.

I gave him a little assist on that and I read the manuscript and it gave me a nice little gong in the front. A lot of people assume I co-authored Hunt; I did not.

The most correct thing you can say about the relationship between Hunt for Red October and “Harpoon” is that “Harpoon” was one of the many data sources that Clancy used when he was writing the book.

One way to tell “Harpoon” was one of [Clancy’s] sources is in the knife fight at the very end of the book where the Alfa-class is dogfighting with Red October. The Alfa fired a “Type-F” torpedo, which is what I called the Russian wire-guided torpedo in my [“Harpoon”] rules. When I wrote the first draft there was almost nothing in the unclassified realm regarding torpedo designations for the Russians. In fact I didn’t want to use the classified stuff—that was amazingly complicated.

I came up with Type A through Type F. When you see a bad guy fire a Type F torpedo [in the book]—that’s Tom using “Harpoon.”

More to the point was Tom asking me questions and understanding the interplay between various sensors and how the weapons work.

Even more important than the hardware data he got from me, was him shooting the breeze with the guys from the Calvert Cliffs Nuclear power plant. Those guys would come over to his office and get their life insurance over there. They were all ex-nuclear submariners. You get any of these guys started and it’s hard to shut them up.

He sucked it all up like a dry sponge and poured it into the book.

Tom did play war games with us. Probably for fun and probably to understand more of what was going on.

USNI News: How did Red Storm Rising come about?

I was working on another war game called “Convoy.” Back in the 1980s there was a big question about direction of the submarine fleet and what the Russians were going to do with their submarine fleet. 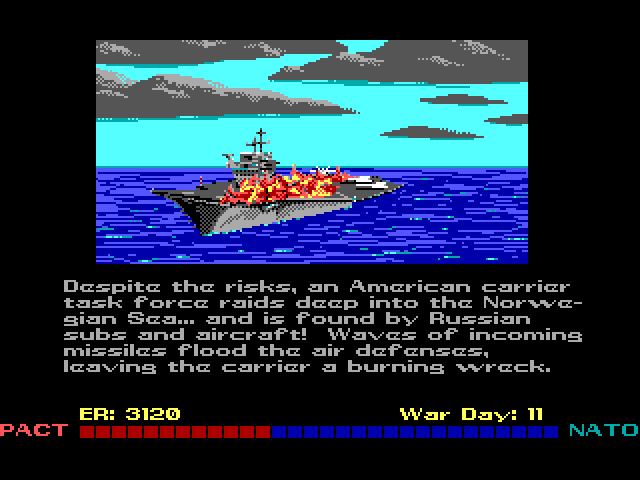 Image from the 1988 game Red Storm Rising by MicroProse based on the novel by Tom Clancy and Larry Bond.

The idea for NATO—if the Russians all of a sudden were going to move west—was the [United States] was going to send a whole bunch of stuff over to reinforce NATO and it would have to go over by ship. Those convoys were [trained in an exercise] called Reforger. Every summer hundreds of ship would [participate].
[“Convoy”] was a very complex game and part of the reason I wrote it was war that games can never resolve or prove a particular point. There are too many dice rolls, too many random elements, and changes in strategy that can shift the whole game.

What it can do is show you what factors are important. You can play it two or three times and the same stuff will float to the surface and you can go, “Ah-ha, this is what we have to pay attention to.”

I was blathering on about “Convoy” and [Clancy] said, “That would make a good book.” He could see the potential of the story and asked me if I wanted to work on it with him.

I was his apprentice, I wrote maybe five sentences of the thing. He would run chapters by me and I would look over particular weapon systems and [how the Russians might react]. If you’re going to apprentice for somebody, apprentice for Tom Clancy for God’s sake.

I watched him put the story together. I watched him lay everything out, create the characters, and fix it when it wasn’t working right. Research it.

For example, there were scenes in the book that involved the Politburo. The different generals are arguing over how to beat NATO. In the early ’80s the Politburo was still a very mysterious thing, we didn’t know a lot about how it worked.

There was a great book called “Breaking with Moscow,” which was published by a guy named Arkady N. Shevchenko. He had been deputy secretary of the United Nations—the highest rank a Russian had held in that organization—and he had defected. 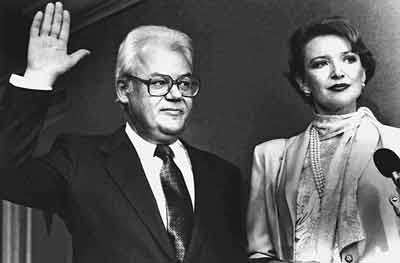 Arkady Shevchenko and his wife Elena.

The book was about his defection and Tom said, “He’s over on our side of the pond, let’s talk to this guy.”

So at some Washington party we showed up and sat there and chatted with the guy. This guy worked with [Andrei] Gromyko he worked with [Nikita] Khrushchev and with all of those heavy hitters and this guy is telling us all kinds of stuff.

My first lesson was, don’t be afraid to find people and ask the question. My second lesson was the type of questions that Tom was asking. I’m all process and procedures; Tom was asking questions like, ‘At the meetings did they serve water or vodka?” or “Where did they meet? Did they meet some fancy hall or have some sort of modern ultra-Soviet meeting room full of electronics?”

He was looking for verisimilitude, so I took that away. I learned researching from Tom.

USNI News: Since Clancy died, several commentators have noted that his books made it once again cool to like the military after the Vietnam War. What do you think?

It was more than cool. For the guy on the street who wasn’t particularly interested in the military there was a “What if?” Vietnam was over in 1972, it had been ten years, the swelling had gone down a little bit.

I had joined the Fleet after Vietnam and it was interesting being in the Navy at that point. There was still a very strong anti-military in a lot of places. But by the early ’80s people were like , “Wow the Russians have got all this stuff, we’ve got all this stuff.”

Nobody was shooting at anybody. Military actions were few and far between. The Cold War really froze everything in place. God, they might shoot back and nobody knew with what. So let’s be polite with each other and there was a gigantic “What if” that Red Storm Rising really addressed. . . . Tom and I were both surprised about how big a hit it was. We were lucky it was such a good fit for what the public was interested in.

I’ve always used the term military thriller. I don’t like to focus on the technology. It’s there and flashy and it’s cool but it’s there for the same reason you have horses in a Western.

These days you can have an F-16 flying around, I’m sorry an F-16 isn’t high tech anymore. It’s a 30 year-old design. It’s like if you use a ray gun and all of a sudden it’s science fiction. I prefer military thriller because the thrust is the military action and that’s the core of the conflict.

USNI News: Any Tom Clancy anecdotes that stick in your mind?
I forget after which [Jack] Ryan book it was, but he took a one-year hiatus. We would talk on the phone during that period and he was always talking about book ideas and story ideas, he couldn’t stop thinking about stories.

Even during that period when he stopped he couldn’t stop thinking about it. He was a born storyteller. The joke was when he visited Ireland, he didn’t kiss the Blarney Stone, he bit and swallowed it.