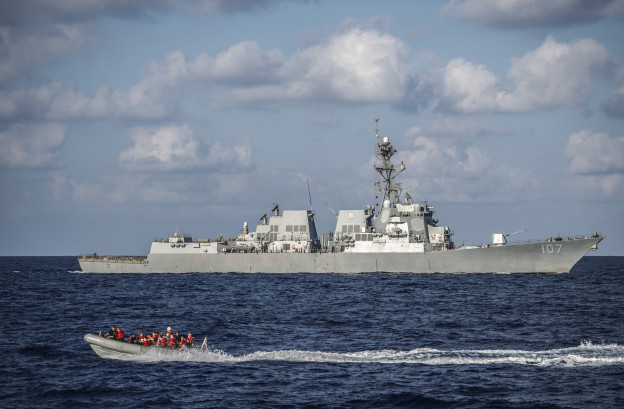 The eastern Mediterranean, off the Syrian coast, presently is saturated with U.S. and Russian warships. The United States has deployed the destroyers USS Stout, Mahan, Ramage, Barry and Gravely, each armed with large numbers of Tomahawk land-attack missiles. The Russian navy announced that it has seven warships in the eastern Mediterranean and that it is sending three more warships—the cruiser Moskva, the destroyer Smetlivy, and the assault ship Nikolai Filchenkov. All of those warships are sailing relatively close to the Syrian civil war’s combat zone.

While the United States has long stood firm on the doctrine of “freedom of the seas” or, as the French more aptly describe it, “the right of innocent passage,” both the United States and Russia have interests in favor of each side of the Syrian turmoil. History instructs us that warships, whether actually neutral or neutral in name only, are at substantial risk when they enter areas of war or combat. When they enter harm’s way they risk being attacked, whether intentionally or by mistake. Among the more renown attacks against U.S. warships have been the incidents involving the Maine, the Panay and the Liberty.

In 1895 the Cuban war of independence from Spain began and the Spanish sent 100,000 troops to Cuba. Although public opinion in the United States favored a free Cuba, the United States remained neutral. The U.S. Coast Guard and the British navy had, in fact, intercepted numerous ships bearing arms for the Cuban rebels and only a few shipments got through. In January 1898, riots broke out in Havana and the U.S. consul general reported his concern for the safety of Americans living in Havana. The response was dispatching the USS Maine—the second battleship in the U.S. Fleet—to Havana, supposedly to safeguard American lives.

Maine arrived in Havana harbor the last week of January and on Feb. 15 an on-board explosion killed 258 of the crew and sank the ship. To this day the cause of the blast has not been definitely determined; it was most likely an explosion of gas in the coal bunkers. But William Randolph Hearst and other U.S. newspaper publishers jumped to the conclusion that the Spanish had caused the explosion. While it was quite illogical for Spain to have attacked the neutral ship—which would have brought the United States into a war on the side of the Cuban rebels—that idea carried the day in American public opinion in 1898.

On Dec. 12, 1937 the USS Panay, a 191-foot river gunboat—one of five specially built vessels that had been patrolling the Yangtze River since 1914 to protect U.S. merchant ships (and Standard Oil tankers in particular)—was attacked and sunk by Japanese aircraft. That was followed by a motorboat attack by Japanese troops after the order to abandon ship had been given.

Earlier that day the Panay had been boarded by a Japanese army officer who was told by Panay’s commanding officer, Commander James J. Hughes, that “the U.S. is friendly to Japan and China alike.” Commander Hughes had large American flags lashed horizontally across the upper deck awnings and a 6-by-12-foot U.S. flag hoisted on the gaff. The Japanese claimed the attack was the result of imperfect communication and poor visibility, and that the Panay had been mistakenly identified as hostile. Two U.S. sailors and one Italian journalist were killed; 43 sailors and 5 civilians were wounded. The Japanese apologized and President Roosevelt accepted the apology. (It should be noted that the Japanese also attacked the British naval ships Bee, Cricket, and Scarab in the same area.)

Little more than a decade later, on April 29, 1949, the Royal Navy frigate Amethyst was plying the Yangtze from Shanghai to Nankino when communist Chinese shore batteries fired on her. Twenty-two men on board the ship were killed; another 31 were wounded. At the time, the communist troops were on the north bank of the Yangtze and the Nationalist Chinese army was on the south bank, the river being the center of the combat zone. The Amethyst at the time had large British flags displayed on both her sides. The Chinese communists initially claimed that the Amethyst had wrongly invaded Chinese national waters and had fired first, but in 1988 the Chinese communist commander admitted that his troops fired first at Amethyst.

In the summer of 1967 war clouds were looming over the Middle East with open conflict between Israel and several Arab states beginning on the morning of June 5. On June 6, the U.S. Ambassador to the United Nations announced to the Security Council that the United States did not have any ships or military aircraft within hundreds of miles of the war zone. The same day a U.S. State Department spokesman announced, “Our position is neutral in word, thought and deed.”

On June 8, the fourth day of the Six-Day War, a U.S. intelligence collection ship, the USS Liberty, having failed to receive five U.S. military communications messages ordering her to stay 100 miles clear of the Arab-Israel combat zone, sailed into the middle of the war zone. Liberty has sometimes been described as a “non-combatant.” However, the U.S. Navy Commanders Handbook on Law of Naval Operations states:

“2.1.1 Warships Defined. International law defines a warship as a ship belonging to the armed forces of a nation bearing the external markings distinguishing the character and nationality of such ships, under the command of an officer duly commissioned by the government of that nation and whose name appears in the appropriate service list of officers, and manned by a crew which is under regular armed forces discipline. In the U.S. Navy, those ships designated “USS” are “warships”.

Thus, Liberty, although inadequately armed, was a warship by definition, having been designated USS Liberty, and having been painted haze gray, the color of U.S. Navy warships. Liberty was mistaken for a hostile ship as a result of a series of blunders by both the United States and Israel, and was attacked by Israel’s air force and navy. Thirty-four lives were lost and 171 men were wounded in a series of aircraft and torpedo-boat attacks.

All credible evidence as well as several U.S. and Israeli investigations have established that the attack was a tragic case of mistaken identity and that a deliberate attack by Israel was completely contrary to Israel’s own best interest at the time. Israel stood alone in the world with only support from one friend—the United States. Nevertheless, like Maine incident, conspiracy theorists having no interest in facts or logic, and in spite of overwhelming evidence to the contrary, continue to insist the Israeli attack was deliberate.

What is the lesson to be learned from the sailing of neutral warships into war or combat zones? Sailing into any combat or war zone is fraught with risk. Time after time it has resulted in loss of life, sometimes loss of the ship, as well as diplomatic tensions, and all without commensurate benefit to the neutral country that put its warship in harm’s way.