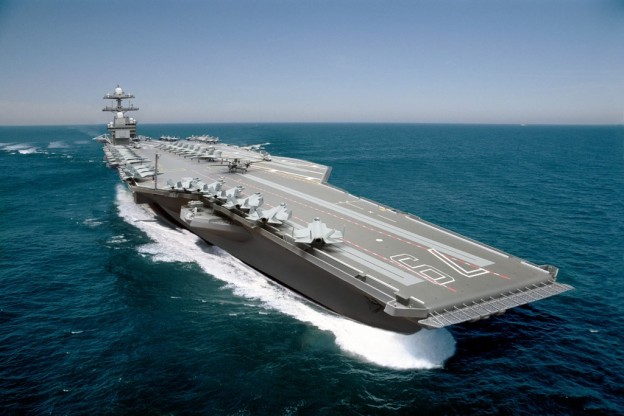 The Navy is delaying awarding a $4 billion contract to start the second Gerald R. Ford-class nuclear carrier (CVN-78) for up to a year, according to a Friday report from Bloomberg News.

The detailed design and construction for John F. Kennedy (CVN-79) was supposed to be awarded to shipbuilder Huntington Ingalls Industries in September, according to the Bloomberg report.

Instead, the Navy will pay HII an additional $296 million to extend a 2010 advanced construction contract, according to a Thursday Pentagon contract announcement.

“Extension of the construction preparation contract avoids a costly production break,” read a statement from Cmdr. Thurraya Kent with the Navy’s office of research, development & acquisition provided to USNI News.
“Until these negotiations conclude, the Navy intends to extend the current construction preparation contract to authorize planning, material procurement and discrete work that are aligned with the ship’s optimal build plan.”

The extension in the advanced design contract will keep essential components of the carrier building process in place during negotiations with the navy, HII said in a statement provided to USNI News.

“This extension will help ensure that the fragile supplier base and our shipbuilders remain working, minimizing delay to ship delivery and associated cost increases,” the company said.

Sources familiar with the negotiations in the initial construction contract for CVN-79 confirmed to USNI News a potential yearlong delay in the award.

The final estimated cost for the ship will be $12.8 billion when completed — a 22 percent increase over initial estimates, according to a recently released GAO report on the Ford-class carriers.