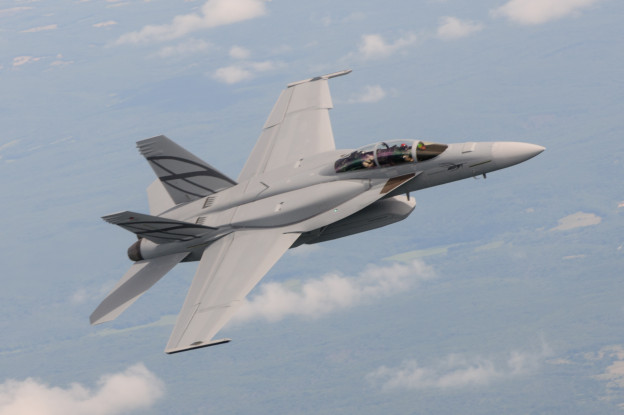 Boeing is touting an upgraded version of its Super Hornet fighters to extend the relevance of the airframe into 2030, company officials told USNI News on a Tuesday visit the Boeing Defense, Space & Security headquarters in St. Louis, Mo.

The upgraded offering — dubbed the Advanced Super Hornet (ASH) — features a modular series of options that include an improved engine, conformal fuel tanks (CFT), a stealthy weapons bay and an improved suite of sensors.

We based our design on “good enough,” Paul Summers, the Super Hornet program director for innovation and capabilities growth, said on Tuesday.
“What do we need to prosecute those targets in that [2030] time frame. We did not want to add unnecessary weight and cost.”

On Aug. 5, Boeing first flew a test version of the ASH which included nonfunctional mockups of the CFTs and the so-called enclosed weapons pod for aerodynamic and radar tests at the U.S. Navy’s Atlantic test range.

Production versions of the CFTs — built by Northrop Grumman — plan to add 3,500 pounds of fuel to the aircraft in a bid to replace extra fuel tanks Super Hornet’s sling under the wing and below the centerline of the aircraft. 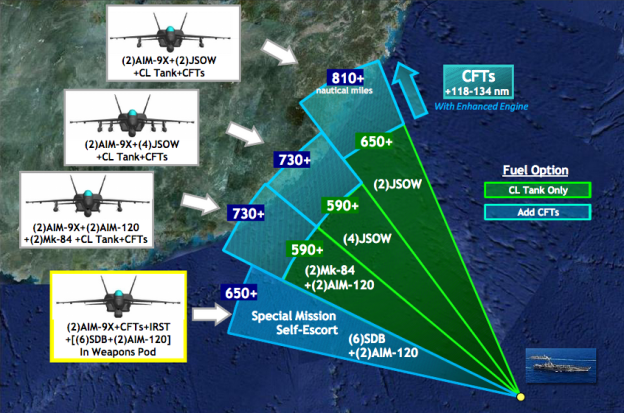 The tanks — positioned on the top of the airplane behind the cockpit — lower the drag of the aircraft compared to the optional tanks. The tanks can extend the strike radius of an ASH up to 118 to 134 nautical miles, according to Boeing. They also allow electronic jammers flown on the Growler to have a greater field of operations, Boeing claimed.

The enhanced weapons pod serves to lower the radar signature of the ASH and allows the aircraft to carry 2,500 pounds or ordnance.

The ASH pitch also includes a modified General Electric F414 engine that would boost the thrust of the airplane by 20 percent.

The move comes as Congress is wrestling with the Fiscal Year 2014 Pentagon budget which would fund the last planned buy of 21 Super Hornet airframe and as the Navy plans its FY 2015 contribution to the Pentagon budget.

The ASH was first introduced in 2010 as a so-called International Roadmap variant geared toward Foreign Military Sales as stealthier, more efficient aircraft.

But recently the company changed the branding of the ASH as a tactical fighter for future U.S. Navy needs.

“We switched the name to Advanced Super Hornet because it fits the domestic market better now,“ Mike Gibbons, vice president for Super Hornet programs for Boeing said on Tuesday.

The Navy is currently scheduled to purchase more than 400 of the Lockheed Martin F-35C Lighting II Joint Strike Fighter (JSF) carrier variant with an initial operating capability for the airplanes planned to occur in 2017.

But the price of almost $150 million an airframe, the perceived difficulty in maintaining the stealth airframe at sea and the Navy’s overall satisfaction with the current Growlers and the F/A-18 E/F Super Hornets could make ASH amore attractive in the current restricted defense budget environment.

Boeing claims it can produce the ASH for $1 billion in development costs and a cost of around $56 million per aircraft — or about ten percent more than the cost of a current Super Hornet, Summers said.