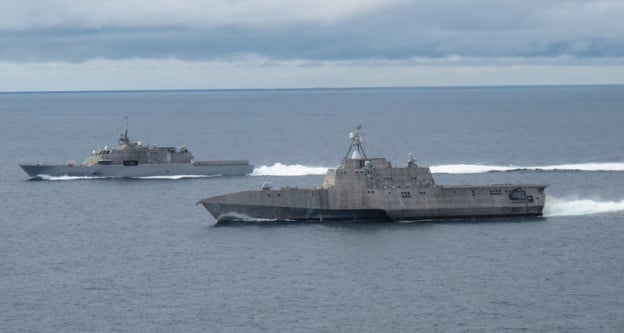 On paper, the new capabilities and updates of existing functions will greatly increase the Navy’s ability to rapidly undertake some of its most dangerous jobs.

However, the mission packages have experienced delays of up to four years in fielding because of design problems, cost overruns, and manufacturing delays, according to the Government Accountability Office.

A July report from the GAO said, “a pause is needed” in the acquisition of the mission packages pending further review of the total LCS program.

“Navy has a great deal of learning to do about the ships, the integrated capability that they are intended to provide when equipped with the mission modules, and how the overall LCS concept will be implemented,” the report concluded.

Ailes acknowledged past failures in the program but painted an optimistic picture of the way forward for the mission packages.

“It’s a wondrous time to be the mission package guy today compared to three years ago because you can point to the successes,” he said.

Starting next year, the Navy will test the packages in a series of operational evaluations (OPEVAL) as a final examination before moving the new capabilities into the fleet. 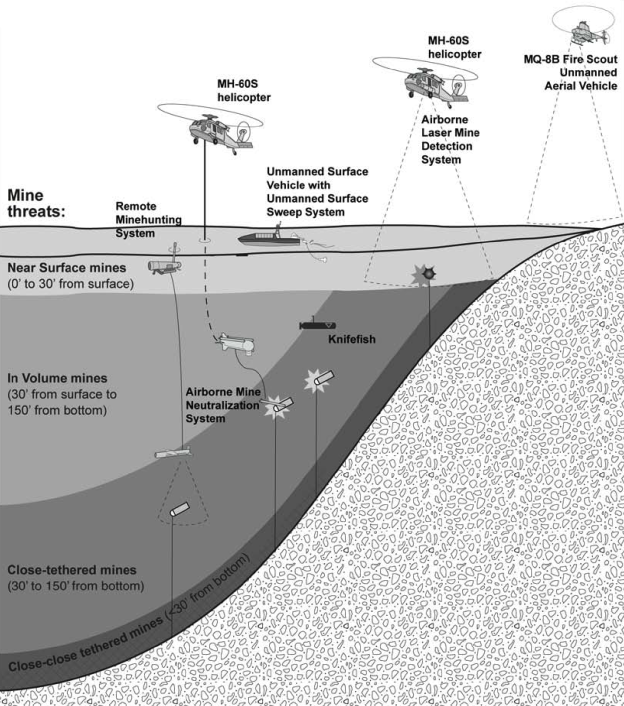 The most important mission for the LCS is mine hunting and minesweeping.

The backbone of the Navy’s mine countermeasures mission is a fleet of small, aging wooden warships—the Avenger class (MCM-1). Those 13 ships— commissioned in the 1980s — are among the oldest in the fleet and have remained long past their anticipated retirement date.

Starting with an operational evaluation in 2015, the LCS is slated to replace the Avengers with a requirement to sweep a mined area in half the time it takes legacy systems in a series of four increments, Ailes said.

In the 2015 OPEVAL the Navy plans to test the fundamental components of the MCM package: the helicopter-deployed airborne laser mine detection system (ALMDS); the mine-killing airborne mine neutralization system (AMNS); the remote minehunting system (RMS), composed of the remote multi-mission vehicle and the AQS-20A sonar. 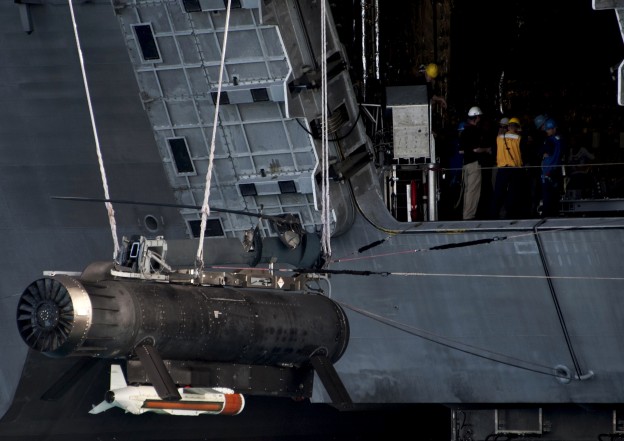 Problems with the RMMV have delayed the MCM package more than any other component of the mission package. “It’s had a storied past,” Ailes said. “Mostly for reliability.”

The Lockheed Martin system operates just below the surface of the water paired with the AQS-20A sonar. The 14,500-pound, 23-foot long behemoth is deployed from the boat launch of an LCS and is controlled by an operator on board the ship.

Early iterations of the RMMV failed on average every eight hours. The Navy had improved the average to 45 hours before NAVSEA undertook a reliability program to improve the performance.

“It was very frustrating with the early tests that we had on the ships because the vehicles we had were not beneficiaries of reliability growth,” Ailes said.

The focus was on improvements in the hydraulic systems of the RMMV, integral to operating the craft, NAVSEA’s Steve Lose told USNI News.

In June, NAVSEA completed its reliability work and now states that reliability numbers for RMMV has grown to more than 200 hours.

“That was highly successful, the reliability issues are really behind us,” Lose said.

AQS-20A is the primary sensor of the mine-hunting systems on LCS. The Navy has largely corrected detection problems found in early developmental testing with training and software and hardware upgrades, Ailes said. A plan to field the sonar from the package’s MH-60S was canceled for safety reasons.

“We took the Q20 and flew it from a 60S for a long time but the problem was, if an engine failed you could lose the aircraft,” Ailes said. “It hardly ever happens but once you lose an engine it would be catastrophic.”

NAVSEA instead decided to field the sonar only on the RMMV.

“That’s the centerpiece of increment,” Ailes said.
“If RMS works you’re going to be able to find mines and do it in a rapid fashion.”

The ALMDS was another program the GAO chided in its July report. 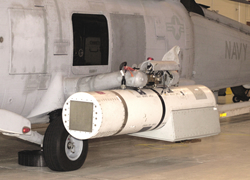 An early version of the Airborne Laser Mine Detection System. Northrop Grumman Photo

Mounted on a MH-60S helicopter as part of the mine package, the ALMDS uses lasers to search for mines floating near the surface or just under the water line.

“One of the challenges airborne laser has is that it was originally designed to be a single pass system,” Ailes said. “What we discovered was false alarms and what we did was create a tactic in which we revisit an area multiple times, looking for persistence in the water column.”

The new tactic combined with an improved computer system will still meet the goal of covering an area twice as fast with legacy systems.

The fourth capability for the first part of the MCM package is the airborne mine neutralization system (AMNS). 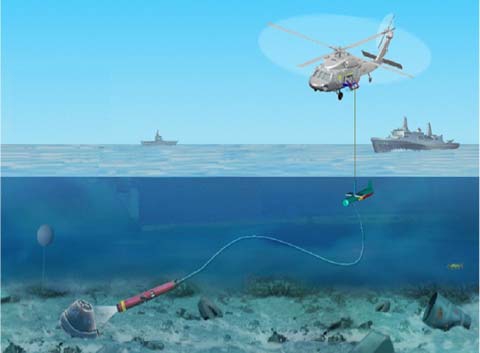 AMNS is lowered by a helicopter in the water after the crew has detected mines and is guided by an operator on board the helicopter to neutralize the mine. The system struggled with breaks in the fiber-optic cord that tied it to the sled; operators also had difficulty engaging the mines.

Ailes said that improvements to the arrangement of the neutralizers and skilled operators have blunted some of the impact of earlier problems with the system.

Following the 2015 test of the first LCS MCM iteration of the MCM package, the Navy will expand the package.

Increment two will include the coastal battlefield reconnaissance and analysis system (COBRA). Mounted on a Fire Scout helicopter unmanned aerial vehicle, COBRA searches beach zones looking for lines of mines, and looks into the surf zone.

“It’s a cable that you tow behind the USV,” Ailes said.

“It provided both acoustic, making noise like a ship, and the magnetic signature of a ship.“ Ailes said. It tells the mines, “I’m a ship, you should blow up.”
The program was successful but the amount of power required to function overwhelmed the cable. “The challenge that we had was, once it was towed behind [for] eight hours it melted,” Ailes said.

Since early tests the Navy has improved the reliability of the cable and currently is soliciting bids to develop the system for an expected 2017 introduction.

The final capability, due for a 2019 introduction, is the Knifefish unmanned underwater vehicle. Ailes said the tests for the system to find and detect buried mines have gone well but introduction could be delayed due to budgetary concerns.

“It was the biggest victim of sequestration,” he said. “That will have some schedule impact for them.” 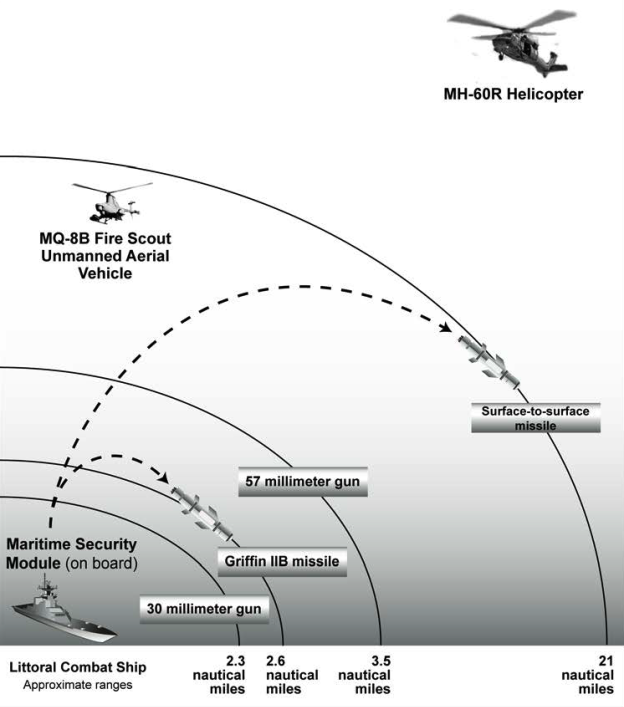 The surface warfare (SuW) package for littoral combat ship (LCS) is the simplest and most-tested mission package the Navy plans to field.

It is designed to convert the ships into close-in fighters, with a primary mission of fending off attacking swarms of small boats close to shore.

The most difficult part of the package has been developing the missile system.
The Navy had planned to use the non-line-of-sight launch system (N-LOS) in partnership with the Army. The almost 25-mile range of the missile was thought to be ideal for the LCS and for placement in forward operating bases. The Army, however, canceled its part in the program, leading to skyrocketing development costs. The Navy then announced in 2011 that it would use the shorter-range (about 5 miles) Griffin IIB missile for initial testing on LCS in 2015, ahead of a longer-range replacement missile in 2019.

“It’s a very short range and you’d like to be able to reach out farther than that,” Ailes said.

When USS Freedom (LCS-1) deployed in 2010 to the Caribbean and the Eastern Pacific, it replaced the missile with extra berthing for Coast Guard Law Enforcement Detachments and Navy Visit Board Search and Seizure (VBSS) teams to assist in intercepting illegal traffickers. The Navy redefined the VBSS capability as the first increment of the SuW package that will be tested in 2014.

“We’ll be heading to OPEVAL next year and we feel highly confident,” Ailes said.

The Navy canceled a version of the ASW package that would have used the RMMV to patrol for submarines in favor of a so-called “in stride” capability that would allow the ship to move at speed to detect submarine threats.

“It is, in some ways, the most mature because it uses systems that have been out for quite a while,” Ailes said.

The current center of the system is a Thales 2087-towed sonar in wide use by the Britain’s Royal Navy.

“Submarines very closely track the temperature, salinity and pressure of the water column. They know the depth they can go to and basically hide because sound is refracted based on the temperature salinity and pressure profile. They call that the layer and they like to hide there,” Ailes said. “If you have a hull-mounted sonar, like on our cruiser/destroyer fleet, there are places there that you just can’t see with your active source because the sound is refracted.”

A variable depth sonar can pierce the layer and allow LCS to detect quiet diesel and electric submarines, he said.

The sonar is paired with a towed lightweight tow torpedo decoy the Navy has had under development. “It’s a very effective torpedo decoy,” Ailes said.

“The planned technologies—consisting of a variable depth sonar, multi-function towed sonar array, and towed torpedo defense capability—are considered mature, and some are already operational in other navies,” read the report. “The Navy highlights this ability to implement a shift in requirements as an example of the benefits of LCS’s modular design, in that it allowed for an easy interchange of systems and modification of planned capabilities.”