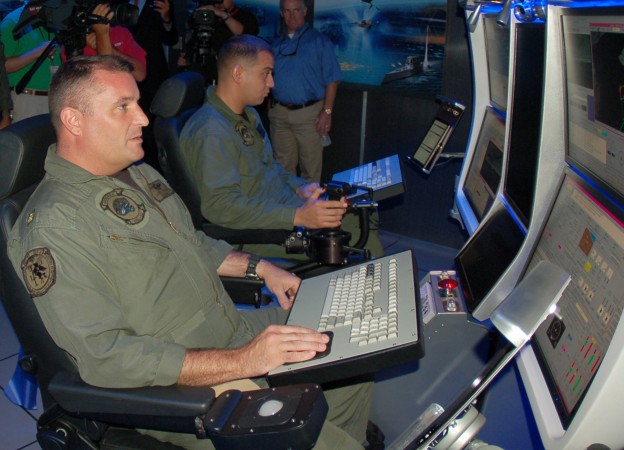 As the Navy prepares to train operators for the bevy of planned unmanned aerial the service should consider creating an officer class specific to the unmanned aerial systems (UAS), said an analyst with Northrop Grumman at the Association for Unmanned Vehicle Systems International Unmanned Systems 2013 conference in Washington, D.C. on Monday.

“The Navy has sourced mostly officers and mostly aviators from a variety of communities sat them down with the UAS contractors with some on-the-job training and perhaps some contractor training and put them in front of consoles and it has worked ok up until this point,” Stout said.
“But it’s inconsistent with the way the Navy has traditionally run a very formal institutionalized, very rigorous training program for its aviation programs.”

Stout used the example of the Air Force’s problems finding aviators to fly the unmanned MQ-1 Predators over early in the air wars over Iraq and Afghanistan.

“The Air Force sourced pilots from everywhere,” he said.
“It was very disruptive, hurt a lot of feelings. It wasn’t the most efficient way to go… and probably drove some people out of the Air Force.”

The Air Force eventually tapped officers entering the service to become a part of a UAS specific community that had a set of performance standards that were different from the rest of the tactical aviation community.

Stout’s proposal would create a similar program that would tap junior officers, give them basic flight training and require flyers to maintain a instrument flight rules rating through the Federal Aviation Administration.

“They’re real pilots, not naval aviators, but they do real flying aboard real aircraft,” he said.

The Navy is still developing the career path for UAS operators and still hasn’t determined if enlisted or officers should operate the major UAS in the service’s pipeline.

However, the Navy has expressed an interest in creating a common control system for its unmanned aerial vehicles that look closer to a mouse and keyboard setup rather than the simulated cockpits used by the Air Force.

The Navy’s UAS differs from Air Force systems in their command and control philosophy. The Navy relies on a greater degree of autonomy with its UAS while the Air Force has their aircraft under direct control.

“It is an autonomous vehicle,” Engdahl said.
“It will be under direct control by the mission operator but there’s no stick or throttle or break pedal inside the mission operator station… You have a man in the loop who can direct the airplane and that can tell it what to do but the execution is on the air vehicle.”