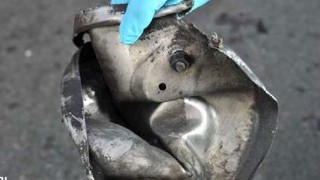 Remains of a pressure cooker bomb used in Monday’s attack on the Boston Marathon. FBI Photo

Though the motives of Boston bombing suspects—brothers Dzhokhar Tsarnaev and Tamerlan Tsarnaev—remain unclear, their “methodologies are identical” to terrorism attacks in Chechnya, a U.S. counterterrorism and North Caucasus expert told USNI News on Friday.

“The same scenario occurs frequently in the North Caucasus, using a single bomb, often in a trash can, then when emergency services arrive, a second bomb goes off, sometimes a third one,” said Paul J. Murphy, author of Allah’s Angels: Chechen Women in War.

“A lot of times these bombs will be put in trash cans or in plastic bags on the side of the street or the sidewalk. There were many similarities like that to the bombings on Monday [in Boston].”

The two bombs that were recovered were built from pressure cookers and filled with shrapnel, a method similar to the tin cans and farm buckets used in Chechnya, he said.

Murphy spent ten years in Russia and spent much of his time studying the methods and motivations of the Chechen fighters bent on creating an independent Islamic nation apart from Russia.

Though the methods used in Boston are similar, Murphy is uncertain of a direct connection to Chechen rebels or their cause.

According to several press reports, the brothers’ social-media footprint could indicate ties and sympathies to radical Islam and Chechnya.

“I think their motivation was Islamism, as opposed to Chechen nationalism,” Robbins said. “I don’t think a Chechen national gives a damn about the United States. The Chechens that are motivated by nationalism are going to be attacking Russia.” 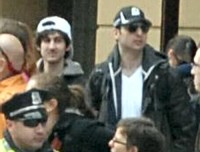 A YouTube page under the name of Tamerlan Tsarnev, the name of the 26-year-old Boston suspect—the “dark-hatted” suspect—contained a video “dedicated to the prophecy of the Black Banners of Khurasan, which is embraced by Islamic extremists—particularly al Qaeda,” reported Mother Jones on Friday.