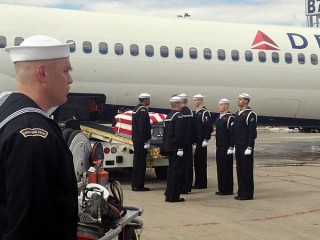 Members of the U.S. Navy Ceremonial Guard conduct a transfer of remains ceremony at Washington Dulles International Airport on March 7 for two sailors from the USS Monitor. US Navy Photo

The remains of two unknown sailors from the Civil War’s most iconic sea battle will be buried in Arlington today in ceremony marking the 151th anniversary of their most famous engagement, U.S. Navy officials told USNI News on Friday.

Secretary of the Navy Ray Mabus will speak at a funeral service for the unknown sailors from USS Monitor at Arlington National Cemetery this afternoon.

The burials come after more than ten years of work by Joint Prisoner of War Missing in Action Command to identify the sailors following the discovery of the remains in 2002.

“It’s navy custom and tradition to honor the final resting place of those in ships and lost aircraft,” Lt. Lauryn Dempsey told USNI News following the announcement in February.

“Secretary Mabus announced his decision to inter the two sailors at Arlington National Cemetery March, 8 to coincide with the 151st anniversary of the Battle Hampton Roads.”

Monitor clashed with the confederate CSS Virginia in 1862 near the current location of Naval Station Norfolk, Va.

The battle was a draw but marked the first clash between ironclad ships and served as prologue to naval clashes in World War I.

The sailors probably died Dec. 31, 1862 when Monitor was lost off the coast of North Carolina. The unknown sailors’ remains were recovered in 2002 in the gun turret of the downed ship. 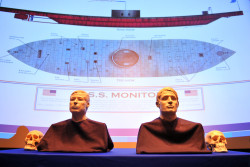 Facial reconstruction of the two unknown sailors from USS Monitor from a March, 6 2012 ceremony in Washington D.C. US Navy Photo

In 2012, researchers at the Forensic Anthropology and Computer Enhancement Services Laboratory at Louisiana State University reconstructed faces of the sailors from the remains. They determined one sailor was in his 30s while the other was in his late teens to early 20s.

JPAC has identified 30 possible descendants from the two sailors and will keep samples of the remains to help with identification efforts in the future, Dempsey said.

For more information on the sailors on Monitor see this April story in the Naval Institute’s Naval History magazine.