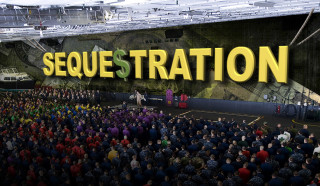 Gortney addressed the Navy’s announcement it would postpone the Middle East deployment of the USS Harry S. Truman (CVN-75) and outlined the current contingency plan.

“The new plan calls for Truman and her strike group to remain in a ready status in the event they are needed to respond to national security contingencies. USS Dwight D. Eisenhower (CVN-69) and USS Hue City (CG-66) will deploy to CENTCOM later this month. The two ships returned early from a previously scheduled nine-month deployment as a way to mitigate the aircraft carrier Nimitz’s delay because of maintenance,” read the Navy statement.

“This new lineup helps us to sustain our readiness for as long as possible, and train follow-on carrier strike groups for deployment later this year and next,” Gortney said. “To do otherwise under these very uncertain budget conditions would mean sending these ships on deployment without reliefs behind them. We will not do that. No one is going on deployment without a projected return date.”

Defense officials told USNI News last week the delay in the Truman deployment would save “hundreds of millions,” in operations funding.